… and it’s Fight Back Friday!

Quite some number of years ago now I worked several months at a Conference Center in rural Michigan as the baker. Being the consummate city girl – I had no idea that rural America still existed. In fact, I actually mouthed the words to my Grammy as she drove from Oregon to Michigan with me, “It’s just so sad that all of America is just one big huge suburbia!” That, of course, was before I was in Nebraska – at which point in time I turned to Grammy and said, “How can we – as a nation – possibly consume this much corn?!” I was young and dumb enough to know virtually nothing about anything but – well, anything is a good word here. Okay – I was a decent baker – must have been for them to want to move me all the way to Michigan to bake, huh?!

It just so happened that for a week each summer said Conference Center had a week off. All staff packed up and went somewhere else for a week. I didn’t really have anywhere else to go. Well… unless…

And that’s when the bright idea hit. I would drive to North Carolina and visit one of my all-time favorite cousins – Bobby. 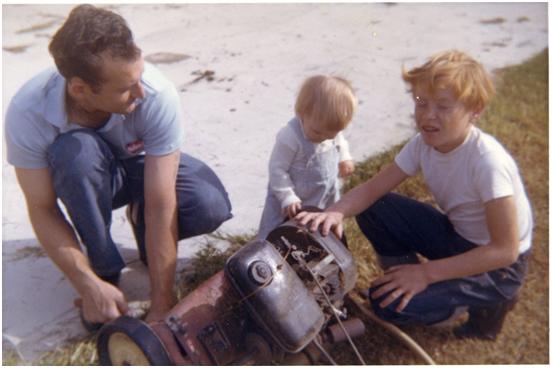 Bobby is my redneck, Southern Baptist preacher cousin. I love the socks off this guy. He’s as real, transparent, fun, hilarious, loving, kind, hilarious, amazing, hilarious kind of cousin that every girl needs. He was living in North Carolina – having been born and grown up in Mississippi for pretty much most of his life – finishing up his Masters of Divinity. He’s not your typical redneck, Southern Baptist preacher kinda guy. He’s the kind who wanted to ride his Harley across the stage at his graduation from Seminary. Have I mentioned that I love this cousin?

So I thought – “Hey! I’ll go visit Bobby! Can’t be too far – driving from Michigan to North Carolina, right?!” This was back in the dark ages – you know – before Google maps and reality checks that they sometimes provide. I called Bobby – told him my plan, and he said he would count the days until I arrived.

So, the day of departure arrived. I had a little cash. I had my stereo and a good selection of music. Some snacks. A huge refillable cup for Diet Coke stops. (Shudder – back in the day when I drank the vile stuff! YUCK!) I hopped in my 1978 Toyota Corolla Station Wagon with 189,000 miles on it and headed South East. 862 miles – I’d driven more than that in one day – I was determined to make it a one day trip – with little stops at places I’d always wanted to see – like Lexington, Kentucky, and Knoxville, TN.

Remembering that I was a virtually uneducated in the ways of other parts of this Great Country that we call home – I was slack jawed most of the trip. It was wild, wonderful, beautiful, amazing – at every turn of the road. I love history. I love architecture. I took LOTS of pictures that I’m sure other people would laugh at. But it was stuff I’d never seen before – and I was awestruck.

I arrived at Bobby’s and was greeted by hugs, kisses, and laughter by his wonderful family. I had the best four days with them. My car had been a little “cranky” on the way down, so Bobby and a mechanic pal of his did a thorough once over on it before I left – getting me a new battery, changing the oil, making sure the radiator had the right mix of water and coolant. Have I mentioned I love this cousin?

My plan for the return trip to Michigan was to take a different route – a more off the beaten path route. I’d studied my map and thought eventually ending up on Hwy 52 and taking it until it ended, until Hwy 23, and then making my way back from relatively familiar territory to my little corner of Michigan.

So I left North Carolina with hugs, love, well-wishes and a sadness that I wasn’t sure when I’d see this much loved family again. I made it 178 miles – until here: 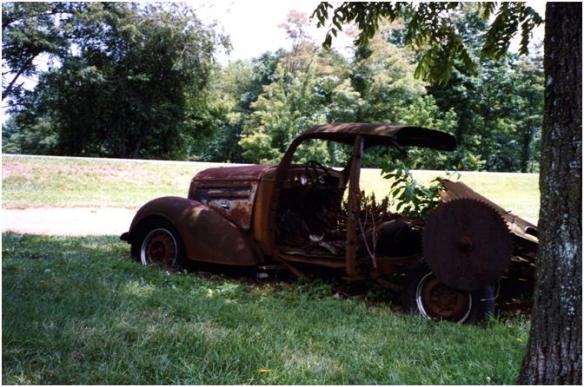 …where my car broke down. I stopped. I looked at this broken down old truck next to me and thought, “This may not bode well.”

I tried every trick in the book. I was a halfway decent tinkerer with that old beater car’s engine. But, nothing I tried worked. I was so relieved I had AAA, found a pay phone (yes – way back THEN – before any of us had cell phones!) not too far away, dug out my change, and made the call. I explained where I was. The operator eventually found my location on the map, and said a driver would be there to assist me within the next 2 to 3 hours.

I just happened to be just a stone’s throw away from a roadside store – with all sorts of interesting stuff – and beautiful seasonal produce. I decided to walk over and take a peek.

I had precious few extra dollars, but something I found here I knew I couldn’t leave without.

It was a little home-produced cook book entitled “Old Timey Recipes.” All hand written. Originally copyrighted in 1969. Its chock full of the kind of recipes that every girl ought to have on her bookshelf. (Like the recipe for Pork Cake! Or the Keepsake Biscuit recipe that was written down by Mrs. Colonel Moore in 1890. Or the Pickled Peaches recipe. I could go on and on – but I’ll spare you.) So I forked over the $3 and left with my treasure to go wait in my car for AAA.

It didn’t take me long to stumble across “Grandma’s Jam Cake.” I’d just been talking to my Grammy about a jam cake that she remembered from girlhood. She’d remarked it was her favorite cake ever, and that it had blackberry jam in it – her favorite. Lo and behold! This little cookbook had what – I was sure – the very recipe Grammy remembered! How cool was that?!

As it turned out, my stay in nearby Hillsville, Virginia ended up being 3 days longer than anticipated. Bert’s 24 Hour Garage and 24 Hour Wrecking Service had to get parts in to fix my poor car.

I spent the time taking long walks throughout Hillsville, visiting the public library, and eating at the local diner. The diner, incidentally, employed the granddaughter of the lady who submitted the Jam Cake recipe to the cookbook. She, in fact, did some of the baking for the diner and happened to occasionally bring in a Jam Cake for the offerings. I thought that pretty amazing.

In my opinion – being a Food Renegade is all about honoring the heritage recipes and traditions about food that our forbearers knew to be the only way to live and eat. So I love sharing this traditional, very down home recipe with you!

So at long last – here it is – from “Old Timey Recipes” – Grandma’s Jam Cake.

I still don’t know how I feel about the Caramel Frosting on this cake. I don’t know – it seems kinda – well, weird. I think it’s far better served with a simple confectioner’s sugar, whole milk, and a tad of vanilla extract glaze. Do what makes you happiest! I honestly think it’s just fine plain with no frosting whatsoever!

I found “Old Timey Recipes” – a hand-written, 64-page cookbook that includes a thorough description on how to make Moonshine in it, at a roadside store and produce stand outside of Hillsville, Virginia in 1992.